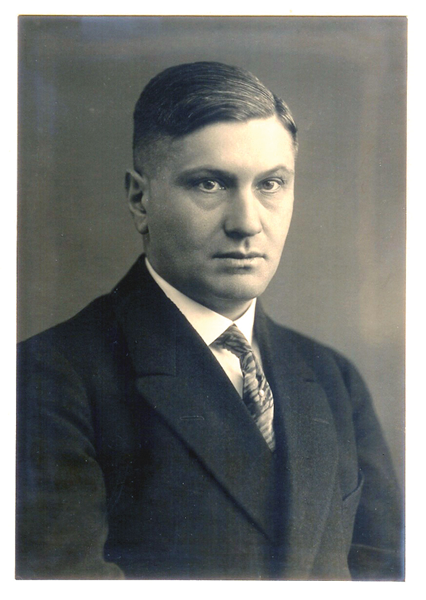 See publications in the menu

Richard Fuchs was born in Karlsruhe, Germany, the eldest son of a well established German Jewish family. Although he trained as an architect, he was a gifted pianist and composer. A disciple of Wagner and Mahler, he wrote symphonies, chamber works, as well as many songs. But because he was Jewish, his music was suppressed by the Nazis and only performed to Jewish audiences or not at all. Ironically, his music with it’s Brucknerian tones was the sort of music the Nazis would have approved of. After Kristallnacht he was imprisoned in Dachau Concentration Camp but was released after acquiring a visa to New Zealand.

He arrived with his wife and two daughters in Wellington, New Zealand in 1939 and worked as an architect. But within six months the world was at war and Fuchs was declared an “enemy alien”. He lost his job and could no longer work as an architect. He struggled to become involved in the fledgling Wellington music scene but despite having recommendations from some of the greatest maestros of the twentieth century including Wilhelm Furtwängler , Felix Weingartner, Ralph Vaughan Williams and Gordon Jacobs, he did not have much luck in getting his music performed.

According to Fuchs’ biographer, Steven Sedley, “Fuchs was arguably the most experienced composer living in New Zealand between 1939 and 1947. In 1939 Douglas Lilburn, the one New Zealand composer of the next generation to attain international recognition was still a 23 year old student at the Royal School of Music in London.” But as his daughter Eva Fuchs wrote, “…they wanted a New Zealand composer not a Jew from Germany”.

Although he remained a late Romantic composer he very much wanted to be part of the Wellington arts scene of the 1940’s. He played with other musicians eg. Frederick Page and met with painters and literary figures such as Alan Mulgan. He drew inspiration from his new home, the gorse covered hills and dramatic Rimutaka ranges and left a large body of work inspired by and created in New Zealand.

This work remained virtually untouched until in 2005 Steven Sedley, discovered a reference to Richard Fuchs and began his research. A biography was written and interest in the works of Richard Fuchs has rapidly developed, in New Zealand and internationally. In 2007 a concert was held in Germany devoted to Richard Fuchs’ music, the first time the music had been heard in Germany for nearly 80 years. In May 2008 a symphonic movement was played by the New Zealand Symphony Orchestra in Wellington and on August 5th, 2008 the Governor-General of New Zealand, opened the Richard Fuchs Archive at Government House. The occasion was celebrated with a chamber music concert by members of the NZSO and premiered two Fuchs chamber compositions.

Numerous concerts followed in New Zealand and in Europe as well as a cinema released feature-length documentary “The Third Richard”.

In 2018 the University for Music and Performing Arts, (MDW) Vienna acquired the archive of Richard Fuchs, returning Richard’s works to their musical and spiritual home in central Europe. As an architect, Richard Fuchs’ buildings in Germany are now landmark protected and as a musician his music is being increasingly heard in New Zealand and Europe.